How Depression Lies to You - Part 1 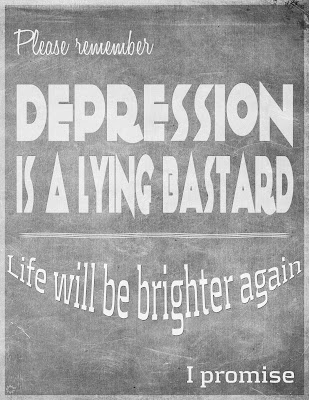 How Depression Lies to You - Part 1

Even though I could go on and on about all the different lies that depression tells, I am going to zero in on just one lie – although I must admit I am having a hard time figuring out which lie to focus on because all of depression’s lies are so destructive. I promise that in my next blog article I will punch the living daylights out of another of depression’s lies.

When depression lies to you and says, “You’ll never get your book published” you feel like you are fighting an impossible battle and want to give up. When you give up, that just reinforces the lie that depression just told you. If we say a true statement – try to substitute another word for the absolute – it doesn’t have the same defeating ‘one, two punch’ of the depressed lie: “It’s been hard to find a publisher for my book. I will continue to search until I find one.”

Since depression has been lying to you for such a long time, it may be hard for you to think of a substitute word. I suggest thinking of your best friend, what would you say to him or her. If your friend said, “I’ll never get my book published” would you say, “Yeah, you better give up trying?” No. You would encourage your friend, “Hang in there. I know it’s been hard, but keep trying. It could be right around the corner. You can’t tell when it will happen for you.”

I encourage my clients to make a game out of catching the absolutes that are not absolutely true. Put a glass jar on the counter of your kitchen. Every time anyone in your household uses an absolute that is not absolutely true, put a quarter in the jar. When the jar is full, treat yourself to something fun or pampering – go to a movie, get a massage, buy a new novel.

At first you’ll notice how many absolutes that are not absolutely true you actually use – and depression may even try to lie to you about that, “You’ll never stop doing this. You’ll always be this way.” (Hey, there’s 50 cents towards your massage right there!) After a while you’ll notice that you can catch depression in the middle of a lie, “You’ll nev…. Stop, that’s not absolutely true!” Eventually you’ll get in the habit of speaking the truth to yourself.

I would love to hear from you – what lies does depression tell you? Do you have any depression fighting tools that work for you?

I want to thank Zazzle Insights for permission to use the image above. You can purchase this card and send it to a depressed friend (or buy it for yourself) at http://zazzleinsights.posterous.com/?tag=cards

Amy Grabowski, MA, LCPC is the Founder and Director of The Awakening Center. She has written a book: “Both Halves of Recovery from Anorexia, Bulimia, and Binge Eating.”

Does anyone know a publisher? :o)

Posted by The Awakening Center at 1:07 PM