All through grammar and high schools, history was my least favorite subject. However, one piece of history I can never get enough of relates to my family. Of particular interest was my great-grandfather Sebastian, who immigrated to the United States from Italy as a teenager. He passed away before I was born, but he left behind a culinary footprint that was handed to my grandmother, then my mother, and me! One of his recipes, calzone, continues on as a Christmas tradition every year. Mind you, this is not the generic calzone sold in the frozen section of the grocery store or on the Americanized Italian restaurant menu. Think of a mixture of ground beef, green onions, chopped green olives, and slices of brick cheese, wrapped in a sheet-pan sized layer of dough on the top and bottom. We used to have a typical seafood dinner on Christmas Eve, and my grandmother would serve the calzone after midnight to start off Christmas Day. While the whole family cannot be together for logistical reasons, on Christmas, the calzone always gets made. Other memories of my great-grandfather have been shared by Great-Grandmother Rose, Grandmother Florence, and Great-Aunt Josephine.

My grandmother's recipe box also holds a lot of history. I never get tired of looking at each of the filed cards, even though nothing has changed since I first started reading recipes. The box is a plain wooden one with a hinged top and cards with tabs for each category. Each recipe in that box has special memories. There's the summer spaghetti recipe we always had at our annual barbecue in July. The numerous cookies that decorated the big silver platter every Christmas. And many others. Outside of the box, I can recall several rituals Grandma and I had on the weekends that were carried over from Great-Grandpa. Making homemade bread early in the morning, preparing for Saturday night family dinner, and mixing batter for any of the countless cookie recipes.

For many of my clients with eating disorders, food-related traditions are no longer enjoyed. The warm memories may be there, but they are over-ridden by thoughts of calories and how one bite can lead to a binge. At The Awakening Center, we are wrapping up our March theme of celebrating immigration stories. If you have any stories related to food, I challenge you to think about what they meant before the onset of your eating disorder. Just like the recovery process, enjoying these traditions again will probably be a slow, step-by-step journey. I consider it one of my responsibilities to carry on my great-grandfather's immigration story to my son. Wouldn't it be nice if your recovery plan included carrying on a culinary tradition from your family? Even better, partaking in these traditions without negative thoughts enhances this process!

Michel Harris a Registered and Licensed Dietitian and serves on the staff of The Awakening Center. She believes in the mindful approach to develop a peaceful relationship with food and exercise in the recovery process of eating disorders. To find out more or to set up an appointment with Michel, call 773.929.6262. 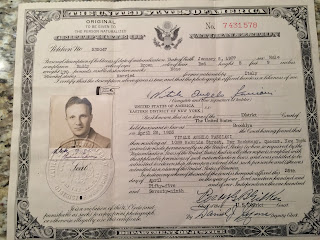 By Sheana Tobey, MA, LPC
At The Awakening Center, the Awaken to Action theme for March is Recognizing Immigration Stories, so I thought I would use this time to tell you a really good one!

Once upon a time, a long time ago, (the late 1930s to be more specific), two men, independent of one another, left their families in Italy to travel to the United States for a chance at a better life. Corrado and Alfonso would eventually become roommates and then so much more. Corrado came to the US many years before Alfonso, and he began working at a butcher shop. Corrado would stay in New York for a time, sending money back to his family. He would also travel back to Italy for periods of time when he had enough money to do so.

Eventually, he came to co-own the butcher shop and stayed in New York. He lived with three other Italian men at the time. When Alfonso arrived in New York, he took over one of the rooms where Corrado lived. He worked as a barber by day and washed dishes at a diner by night. Each man left behind a wife and two kids. Corrado’s wife would die of an illness during the war. His daughter, Irma, would marry an Italian man and stay there. However, in 1946—when the war was over—Corrado’s 19-year-old son, Vito, came to New York to join his dad. Around that same time, Alfonso’s wife, Pasqualena; their 14-year-old daughter, Flora; and their 9-year old son, Mario left everything they knew behind to join him in New York. As they arrived to the US—with the Statue of Liberty welcoming them warmly—none of them knew any English.

Upon arrival, Vito went to work with his dad at the butcher shop and eventually enrolled in night school, where he met some of his lifelong friends. He took notice of Flora early on, but recognized that she was too young for him. However, he told himself that when she “developed” he would ask her out. Flora wanted to attend school when she came to the US; however, without knowing the language, it was a futile effort. Instead, she got a job at a factory sewing.

Time passed, and sure enough, Flora developed into a beautiful woman, who had many eligible suitors. None, however, were a match for Vito’s charm. He won her hand in marriage when she was 18. Their first child arrived not long after. Her second child, Lorraine, was born when Flora was 20. Two years later, she gave birth to Victor.

By this time, Corrado and his partner were ready to sell the butcher shop, so they passed it down to Vito and Flora. Early on in this endeavor, they didn’t have a car, so Vito would get up every morning and take the bus to the meat market, where he would buy a whole side of beef, among other items. He would hop back on the bus and take it to the shop. (Can you imagine sitting next to someone on the bus carrying a whole side of beef?!) Flora would go ahead of him to the shop to open up. They did this year round—in the heat of summer and in the brutally cold winter months.

Many years later, Flora wanted another baby, so they had one—Michael. By this time, they had a truck, making the commute to the shop much easier. They all lived in Far Rockaway, New York, two houses down from Pasqualena and Alfonso, who helped take care of the kids. Vito and Flora discouraged the kids from learning Italian because they wanted everyone to fit into American society. Every Sunday, they would have family and friends over for elaborate dinners set by Flora. They all lived a happy life that they worked very hard to have. The End.

This is the immigration story of my family. I was lucky enough to grow up knowing Pasqualena, Alfonso, Vito, Irma, Flora and Mario. This past year, my mom, Lorraine finally bought a tape recorder to record all of Flora’s stories. Like, how when she was a brand new baby, Pasqualena’s breasts were infected. But they had Flora drink the breast milk anyways to extract the disease. Flora lived with an upset stomach for the first 10 years of her life, perhaps a small price to pay to save her mother.

Another story recounts how time Flora was working on her family’s farm in Italy and one of the chicken’s wattles tore open and all the corn it had been storing there fell onto the ground. The chicken was none the wiser, so it just kept eating the corn, and it continued to fall to the ground. Flora had to stitch the chicken up! I digress. Not many of us are lucky enough to grow up, into adulthood, with our parents or grandparents who can share these stories. Mine carried with them true immigration stories of courage, resilience, and determination.

The chefs and dishwashers at the restaurant I work at tell me similar stories all the time, except it is happening to them right now, in 2017. I encourage each of you to find out if your family holds an immigration story. Take the time to ask about it. Ask your friends about their family stories. Knowing about America’s rich history of diversity opens us up to empathy and acceptance of those who come from different backgrounds than our own.

Sheana is a Licensed Professional Counselor at The Awakening Center working with individuals and groups. She creates an empathic, accepting environment in which she walks with her clients on a path toward peace and happiness. For inquiries or to set up an appointment, please contact her at (773)929-6262 Ext. 16 or TobeySheana@gmail.com.

Posted by The Awakening Center at 11:01 AM 3 comments:

By Nancy G. Hall, MA, LPC
Spring is in the air! And The Awakening Center’s advocacy mission continues.

March marks the start of our focus on immigration stories.

Unless you are 100 percent Native American, your ancestors came from someplace else. Some of you might be new to the United States yourself; while others can their trace forefathers’ and –mothers’ journeys back many generations.

Nearly all of us have roots elsewhere. And even for recent immigrants, the journeys aren’t easy. There is something different about a person who decides to leave everything behind and venture off to a new country. There is an internal optimism needed to take that leap of faith. And those whose families survived enslavement or indentured servitude have a strength that is awe-inspiring.

This month we Recognize Immigration Stories. The richness of all of our histories and cultures. The “tossed salad” that is the United States.

Throughout the month, visit our Facebook page (“Like” us if you haven’t already) and participate in the challenges that will be posted. Stop by our office and look for more information on the bulletin board along the stairway.

Most importantly, connect to your curiosity and explore the stories around you. What are your family stories? What about your friends? Do some reading and reflecting. Share your stories with us!

If you have an immigration story you’d like to share on our blog, email me at nancyhalltac.gmail. We’d love to hear from you!

Nancy is a staff therapist at The Awakening Center. In addition to seeing clients for individual therapy, she facilitates the adult DBT group and the Eating Disorder Therapy Group. Like her on Facebook and subscribe to her personal blog.

Posted by The Awakening Center at 12:15 PM 3 comments: